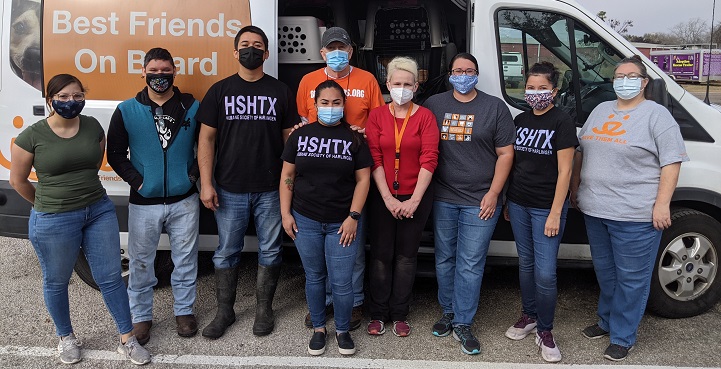 We pride ourselves on building a robust Network partner program that can help rescues and shelters of all sizes, from all over the country. But the true strength of the Best Friends Network is in the connections made between organizations and how they can help one another in times of need. And there are no greater times of need than natural disasters and emergencies like the recent winter storms that plunged Texas into freezing darkness.

Even before the temperatures started dropping, rescues and shelters knew that they could be facing dire conditions for their animals—especially if their dog kennels were located outdoors, a reality for many organizations in the state. The Humane Society of Harlingen (HSHTX) started posting calls for foster homes on social media a week before the frigid temps hit.

“Luckily all of our kennels are indoors, but we only have 35 kennels total and all of them were full,” says executive director Luis Quintanilla. “We wanted to make sure we had space for the emergencies we knew would come in.”

No sooner was HSHTX able to move out some dogs than they heard from an open-air shelter in a nearby community that needed help. They made room for six, and within days those dogs and several others were on transports to other organizations. Several of those receiving organizations had responded to a survey that Best Friends sent to thousands of Network partners, asking both who needed help and who could step up. 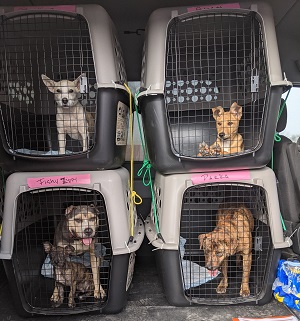 Another Texas group that indicated it was in need of help was Wharton County Stray Pet Outreach Team (SPOT), located about an hour southwest of Houston. With the community practically shut down and a lot of residents without power or water, things were looking grim for the 10 large adult dogs in SPOT’s care. According to president Christine Stransky, that is a lot of dogs for an organization that relies on outdoor kennel space at several local trainers and a nearby ranch.

“In late January, we had reached out to help a nearby shelter that was overwhelmed,” says Christine. “It’s a very small cinderblock building with six unheated kennels, and they were up to 15 dogs. Since we regularly transfer dogs to Kitsap Humane Society in Washington and Wood County Humane Society in Ohio, I figured we could help.

“But then the weather hit, we didn’t have any transports lined up and the dogs couldn’t stay outside in the freezing weather,” she adds. “There seemed to be no light at the end of the tunnel.”

Then, she says, she received the survey asking if groups needed help.

“I get emotional when I get those emails because it’s a lifeline for our dogs and cats,” she says tearfully. “I got one after Hurricane Harvey, too, when our town was flooded and cut off. Just hearing someone say, ‘We stand at the ready to help you; what can we do?’ is overwhelming.”

Another group that responded to the survey with an offer of help was Good Shepherd Humane Society (GSHS) in Eureka Springs, Arkansas.

“At first I thought I’d definitely go get 10 dogs and then just figure it out,” says GSHS director Cole Wakefield. “I had to remind myself that if we got overloaded, we would be doing a disservice to all the animals in our care.”

Since GSHS was already full, Cole put out a call for emergency fosters and two stepped up right away. With those new homes, the shelter was able to take in Hercules and Victoria, a pair of heartworm-positive, shepherd-mix siblings from SPOT. The remaining eight SPOT dogs went to Best Friends in Atlanta.

“We aren’t able to do much as a small organization, but we did what we could. We couldn’t let them sit and suffer,” Cole says. “Big or small, we can all help each other.”

On the opposite end of the country, the Humane Society for Southwest Washington (HSSW) raised its hand and offered to take about a dozen dogs from Harlingen. Since neither organization was in any position to do the actual transport, Best Friends put together several transport legs, recruited volunteers, and soon four puppies, one small dog, a few mixed-breeds and two to three pitties were on their way out of the icy Lone Star state.

Although this is the first opportunity HSSW has had to support Network partners during a disaster, they regularly transport dogs out of Texas from their sister shelter, the SPCA of Brazoria County. 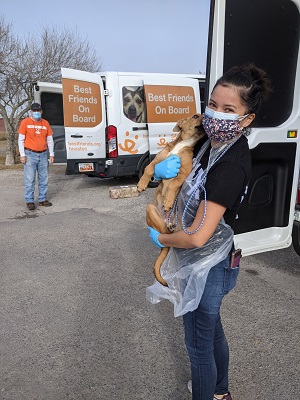 “A lot of shelters don’t know how to do transport, how to do health certificates, so it’s important to mentor them and help them understand the processes and protocols,” says HSSW transport coordinator Ashley Campbell. “It really opens up so many lifesaving options. In the case of the Texas storms, having Best Friends put out that massive request was critical.”

“This little winter storm is another echo of COVID,” Luis says. “It’s awful, but we found a way to help one another and maximize efforts.  Whenever something bad happens, we need to capitalize on the urgency, share ideas, and make constant improvements.”

“I believe there aren’t just local solutions. Dogs and cats don’t recognize city limits, so we all have to work together,” he says. “The only way to serve communities spread over hundreds of square miles is coalition building and dismantling silos we’ve built around ourselves.

“We’ve worked quite a bit with the Best Friends regional team in northwest Arkansas and it’s been a true partnership,” he continues. “That’s not only how we’ll solve the challenge of an emergency like these freak winter storms, but it’s also how we will cross this last mile to no-kill.”