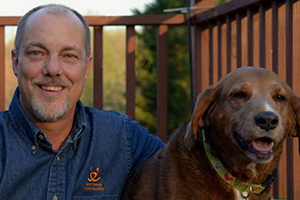 Scott Giacoppo is the Director of National Municipal and Shelter Support for Best Friends Animal Society and oversees the development of lifesaving efficacy and sustainability for animal welfare partners across the U.S.

Through Best Friends’ shelter outreach program, Scott provides leadership and hands-on training for strategic shelter partners; conducts professional shelter operations and field assessments; and leads progressive, humane trainings for animal control agencies and officers. In his current role, Scott champions a collaborative approach to partnership and believes that each animal welfare organization, along with the community it serves, is unique and deserving of support that speaks to its individual needs.

Prior to joining Best Friends, Scott was Chief of Animal Field Services for the District of Columbia for 10 years, overseeing all animal control and cruelty investigations team members for Humane Rescue Alliance. In this role, he designed and implemented a number of successful community-based programs, helped draft and secure critical animal protection legislation, and represented the organization as a speaker at various regional and national events. He also established a trap-neuter-return program that garnered citywide support and helped reduce the percentage of stray cats killed from 85 percent to 12 percent.

Scott has been involved in animal protection since 1989, when he became an Animal Caregiver in Minneapolis. He soon returned to his hometown of Boston, Massachusetts, where he began his career with the Massachusetts Society for the Prevention of Cruelty to Animals as the Special State Police Officer for Cruelty Investigations. During this time, he received the Boston Police Commissioners Citation for work with dangerous dogs and street gangs, certificates of excellence for promoting and providing community policing education from the New England Crime Prevention Partnership, and a certificate of appreciation from the Rockingham County Attorney’s Office in the state of New Hampshire for assistance in investigation and prosecution of precedent-setting animal fighting cases.