Julie Castle, the CEO of Best Friends Animal Society, was the first-ever guest on The Best Friends Podcast, and we were excited to have her back for episode number 52! It's not even been a year since we last spoke, but we had plenty of things to discuss in what has been a very tumultuous year for our field and the country overall.

Even though the last 11 months have been overwhelming, Julie says she's tried to see this moment as one of opportunity. And as we finally face the complex issues that have held our field back including racism, and classism, we hear Julie's perspective on the lack of diversity, equity, and inclusion and learn about the progress of the effort to right those wrongs within Best Friends.

She also explains why she believes No-Kill 2025 is every bit as relevant today as when the goal was announced in 2016 and how she handles criticism, even when it's from the harshest of critics. 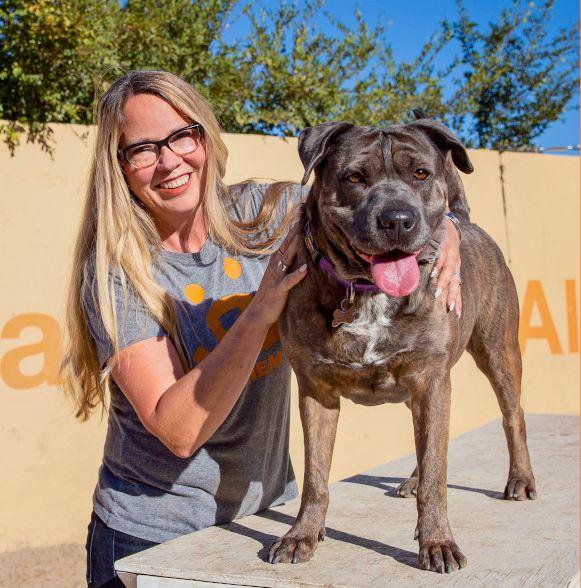 Julie did whatever job or chore was needed to keep the organization running, including animal care, landscaping, off-site adoptions, answering the phones, taking visitors on sanctuary tours in one of several beat-up old cars and “tabling” in front of grocery stores for donations.

As the organization grew, in 2000, Julie led No More Homeless Pets in Utah, a statewide no-kill coalition led by Best Friends that comprised more than 160 rescue organizations, animal control agencies and veterinarians. During her six-year tenure, Utah achieved a 30 percent reduction in shelter deaths statewide.

In 2007, Julie was tapped to lead Best Friends’ community programs and services division, re-envisioning a Best Friends–led network of shelters and rescue groups into a mission-oriented collaboration now known as the Best Friends Network, which boasts thousands of partner organizations nationwide. Identifying the primary reasons for animals entering shelters, she established Best Friends core initiatives to address three areas of focus: pit bull terriers, community cats (otherwise known as feral cats), and puppy mills and pet stores. In so doing, she led the organizational move to narrow Best Friends’ work into these highly focused and effective channels of activity, including spearheading the development of the organization’s first legislative team. The work stemming from that decision has changed the national landscape in terms of the pet trade, pit bull legislation and community cat programming.

In 2014, Julie took on leadership of the organization’s fundraising efforts. Under one combined division, the communications, marketing and development teams were able to flourish, with the result that in four years, fundraising grew from $60 million to $132 million, and membership grew by 30 percent.

Over the years, Julie has championed the unique concept of multiple organizations and municipalities joining forces publicly to tackle a shared social problem — to end the killing of dogs and cats in shelters. She organized the design, groundwork and coalition-building for NKLA (No-Kill Los Angeles), a community-focused initiative that brought together the city of Los Angeles and more than 130 organizations to make L.A. a no-kill city. NKLA formally launched in 2012 and has led the city of Los Angeles from a save rate of 58 percent to 86 percent by the end of 2017. As part of that work, Julie initiated a successful bid to operate the city of Los Angeles’ Mission Hills shelter as the Best Friends Lifesaving Center.

Recognized as a leader and voice of the national no-kill movement, and named by InStyle Magazine to their “Badass 50” list as one of the 50 top women in the country who speak up, show up and get things done, Julie lives with her husband, Gregory, in Utah, where they run marathons and hike in southern Utah’s red rock wilderness. Julie also enjoys restoring historic homes, is an avid gardener and owns a pizza joint in Kanab, Utah.