Tricks of the trade

Last week we talked about how you can use fosters to care for one of the toughest population groups in the shelter: ringworm kittens. This week, we’re here to take on another group that routinely strains resources and comprises a large percentage of animals losing their lives in both shelters and rescue groups: neonatal kittens.

Many shelters are converting finders to fosters and implementing awareness programs like “Don’t Kit-nap the Kittens” to slow the flow of tiny felines. Such foster opportunities are critical when it comes to helping neonates thrive. Trouble is, those fosters also tend to be hard to find.

The reasons why people are reluctant to take on a bottle baby or two (or more) are many. Those reasons are also perfectly understandable when you consider that fosters are literally responsible for whether such kittens live or die.

That means properly preparing such fosters is not just critical to raising happy and healthy kittens; it also helps keep them coming back to foster more litters. While you probably have written guidelines already, our cat content strategist Samantha Bell has some tips worth adding into your neonatal foster package.

Samantha is well-equipped to hand out neonate advice. She started out in 2013 volunteering in Best Friends’ Kitten Care Center in Los Angeles, eventually joining the staff and caring for more than 50 litters over the years. But she fell hard for neonates in 2018 while she was going through a horrible divorce.

“It was really rough, and I was a wreck,” says Samantha, who was fostering hospice cats at the time. “I knew I just couldn’t have something else in my life that would make me cry; I needed some fun.”

So, Samantha grabbed a litter of neonates and found that they injected that much-needed fun (and distraction) into her life.

The most fundamental part of caring for neonates—and the most frustrating—is getting babies to eat from a bottle. Since fosters are essentially surrogate moms for orphaned kittens, Samantha stresses that recreating the “mom experience” will smooth the path to successful bottle-feeding.

“When kittens are nursing from their mom, their environment is warm, dark and soft,” says Samantha, who replicates this environment by covering a heating pad with a soft blanket and then placing a toddler-sized neck pillow on top of that, which is also covered in a fluffy blanket. “This way, the kittens can be supported at the proper angle by soft, warm ‘fur’ while drinking. I hold out my thumb and pinkie so they can grasp the fingers with their paws and keep their arms stretched out in front while drinking.”

“It doesn’t exactly create competition for the nipple,” she says. “But they push each other in a way that mimics what they’d do naturally. I always feed whoever is smaller or more critical first, and I find that makes the second kitten more excited to eat.”

At this point, brand-new fosters might be saying something like, “How can I feed two at once when I can’t even get one of them to latch onto a bottle?” That’s true and is also why Samantha doesn’t recommend this strategy for first-time fosters since it requires a bit of juggling.

She does, however, have another tip that’s pretty much foolproof as far as getting babies to latch.

“When I first started in the nursery, I learned that kittens make a ‘u’ shape with their tongue that touches the roof of their mouths,” Samantha says. “If you're pushing down the tip of the bottle down towards the bottom of that ‘u,’ they're never going to be able to latch. Instead, gently press the bottle up against the top of their mouth between the sides of the ‘u’ so they can get suction.”

Samantha diverges from the common practice of moving neonatal kittens onto gruel when they are about five weeks old.

“People think I’m spoiling them if they see me bottle-feeding five-week-old or older kittens,” she says. “But the reason shelters switch to gruel at that age isn’t related to their nutritional needs. Without enough staff who have time to bottle-feed, it’s just easier to put gruel in a bowl.”

Samantha does warn fosters to keep an eye on whether kittens start chewing on the rubber nipple, which runs the risk of them swallowing pieces. If they aren’t, it’s safe to feed them as long as they want.

“Eventually, they’ll stop on their own and move over to gruel or even canned kitten food,” says Samantha, who learned this approach from Kitten Lady. “In my experience, letting them choose to continue nursing makes for a more behaviorally well-adjusted baby.”

Lastly, fosters need to know that patience is key.

“If you’re in a rush or are frustrated, as ‘woo-woo’ as it sounds, the baby can sense it,” Samantha says. “If you are enjoying feeding them, they're more likely to see it as a positive experience and latch.”

The kitten experts we interviewed for our piece noted that bathing kittens mimics mom’s behavior and builds a bond. In most cases, however, “bathing” should be done with a warm washcloth and not by dunking neonates into a tub of water. 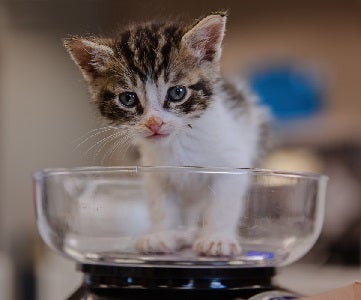 “Only bathe young kittens that way if it's medically necessary,” Samantha says. “You don’t want to risk them getting cold, because kittens can’t regulate their own body temperature until they are about five or six weeks. Even like the slightest bit of dampness in a little armpit or something could be fatal.”

“Even if kittens are covered in poop, I always feed them first,” she says. “That’s because the bath makes them agitated and upset and they’ll be less likely to latch onto the bottle and drink well.”

No matter how kittens are cleaned up, it’s important to warm them up quickly. This can be done by rubbing them vigorously with a towel, then blowing them dry with a hair dryer. Then put them into a carrier, box or tunnel bed set on top of a heating pad (covered by a blanket – never place kittens directly onto any heating pad or disc!). Samantha likes to drape another blanket or towel over the carrier to create a kind of sauna for the kittens.

For fosters giving subcutaneous fluids, those should also be warmed. Samantha has an electric bottle warmer that can be set to a certain temperature, but you can also put the syringe in a mug of heated water.

“I also put the wipes I use to stimulate them to go to the bathroom on top of my warming device, so they are nice and comfortable,” she says.

If the foster is giving medication, they shouldn’t do so in the same place where they feed.

“I fostered a kitten named Macaroni who was on several meds for tummy issues,” Samantha says. “At first, I fed and gave him his medicine at the feeding station. But the medicine clearly tasted awful, and the next time I tried to give him his bottle, he pulled away and shook his head.

“That’s when I decided to give only bottles and love at the feeding station,” she continues.

“Macaroni still got his medicine, but it happened on a different table and blanket,” she says. “Once he realized that only good things happened at the feeding station, he was back to drinking well without hesitation.”

Kittens need more than food and a warm place to sleep; they also need help turning into behaviorally sound cats. The best way to do this is to pair singletons with “sibling” kittens so they can learn social norms together. 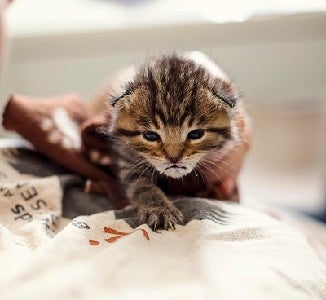 “Cats are born predators; they have claws and teeth and want to use them,” Samantha says. “By starting them off in life with a feline friend, they will be less likely to use their hunting techniques on you.”

If Samantha is asked to take in a single kitten, she takes the baby home but asks to be contacted about the next singleton needing foster.

“There’s always a single one who needs a place to go,” she says.

Letting kittens make their own choices is a part of helping them meet developmental milestones. While literature recommends waiting until four weeks to introduce kittens to a litter box, Samantha does so earlier.

“There are many baby Einsteins out there who are ready to use the box at three weeks,” Samantha says. “Just make sure to use non-clumping litter, as clumping litters can cause gastrointestinal issues.”

Kittens who spend most of their time confined to a very small space (like a kennel), also need space to walk around once they’re mobile.

“No matter how small they are, give them the opportunity to toddle around on the rug and learn to walk,” Samantha adds. “Once they get a chance to move around, in my experience they are going to be hungrier—plus they are hitting developmental milestones.”

Tending to personal needs, too

It’s easy to focus on the many needs of neonates and forget that we have needs, too.

“Foster parents must remember to also take care of themselves,” Samantha says.

“Sleep is crucial, especially when they have bottle babies,” she continues. “I always feed my kittens right before I go to bed, then I sleep in 90-minute intervals, which is considered a full REM sleep cycle. If you only have three hours until the next feeding, every minute of sleep counts.”

Fosters need reassurance and recognition if you want them to keep taking in neonates, and Samantha says she always reminds them how they are impacting these little lives.

“When people foster kittens, they may think all they are doing is providing a place for a few sweet babies to hang their hats in the early days of their lives,” she says. “But they are altering the trajectory of their lives, making it possible for them to grow and thrive and get adopted.

“Just like I learned when I was going through my divorce, bottle babies depend on us so much,” she adds. “You just get this sense of pride that you woke up in the middle of the night to take care of them, and they are healthy and happy because of you. It just makes you feel so good.”

For more content about kittens, check out the following resources: