Getting past “the ringworm stigma”

You’ve probably had this experience: a litter of adorable, charming, fluffy kittens comes in the door, perfectly socialized and healthy. “These guys will go fast,” you say. And then… you see it. That telltale circle of missing hair and crusty skin.

Now these kittens will be stuck in a back room at the shelter, which is the only area where you can quarantine them. They’ll be with you for weeks, maybe months, and your staff are doomed to smell like rotten eggs for the duration. By the time the Woods lamp shows no new lesions, and all skin scrapings are clear of the fungus, these attractive kiddos will be teenagers – or even adults.

Having animals with ringworm in your shelter is an unwelcome challenge no matter what your resources may be. And there are still places where those lesions are considered untreatable – maybe there aren’t enough staff to manage care, or there is a high potential for it to spread throughout the building.

But a ringworm diagnosis doesn’t have to feel insurmountable.

Many shelters are taking new approaches to managing their ringworm kittens (and cats, though the fungus is far more prevalent in the youngsters) and seeing great results. The benefits of building more robust programs to treat ringworm in a shelter setting – or to move those cats into fosters – are many.

Not only does allowing the public to take a role in helping these cats destigmatize ringworm, but the kittens get more socialization, the risk of transmission throughout the shelter drops drastically and staff workload is decreased (plus the cat caregivers get an opportunity to NOT smell like rotten eggs from all those lime sulfur dips).

The first step in building a comprehensive ringworm program is to overcome the fear that it will rage through all your cat kennels and lock down every cage until the cats clear – or require your shelter to start euthanizing for space. Getting over that (legitimate) fear sometimes requires jumping into the deep end. 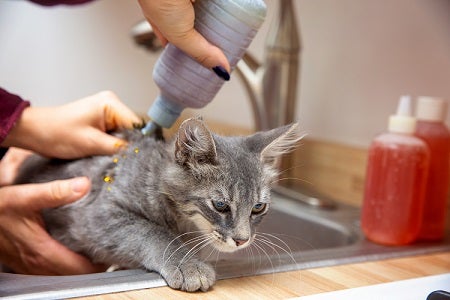 When Jennifer Wilcox, DVM, arrived at  her first shelter job, she found that their protocol was to euthanize all kittens  with ringworm. That stopped, however, when Jennifer became medical director.

“The sheer volume of healthy, happy kittens and adult cats who happened to be missing some hair was enormous, especially coming from large-volume intake cases,” says Jennifer, who is now the shelter veterinarian for Pima Animal Care Center (PACC) in Tucson, Arizona. “Once we started treating and seeing lesions regrow hair within a week, we never turned back.”

When she was hired at PACC, Jennifer walked into a shelter that dealt with ringworm kittens from a population management standpoint. That is, they were euthanized instead of treated. But she brought her experience to bear on the situation, and radically changed outcomes for those cats.

“For years, the bridge from not saving them to saving them all was putting them on a short-term rescue list with 24 to 48-hour time commitments,” says Jose Ocaño, a previous director at PACC who is now senior director of people and culture at Best Friends. “Dr. Wilcox brought a whole lifesaving framework from a medical point of view, and she enabled the staff to have veterinary support to treat in-house and in foster.”

Treating ringworm in-house is rather straightforward and can be adjusted to align with shelter resources says Erin Katribe, DVM, medical director and veterinarian at Best Friend, who has been helping develop ringworm management programs for various shelter partners. For instance, if a shelter partner is unable to implement a comprehensive management program all at once, Erin helps design a stepwise approach instead. 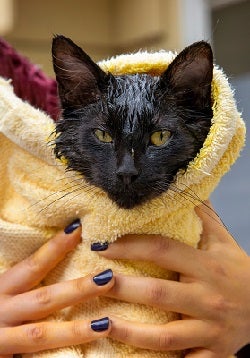 “One shelter started with oral medication only and kept the cats in an isolation ward,” Erin says. “Over time, as additional resources allowed, it added lime sulfur dips and in-house fungal cultures. We knew that the less intensive approach was not ideal, and cats took longer to clear, but it allowed us to save cats who previously were losing their lives for a treatable disease.”

The shelter monitored closely for signs of a ringworm spread outside of the isolation ward and were ready to re-evaluate if that happened. There were no transmission issues, however, and the shelter was able to implement a program that resulted in live outcomes for hundreds of cats within the first year.

“When we combine topical treatment with isolation biosecurity procedures, staff training and staff accountability, preventing the spread of this fungus is straightforward,” Erin says. “It’s key to monitor for transmission of any infectious diseases in your shelter population, though, and if you do observe transmission, then that means it’s time to evaluate protocols and staff compliance.” 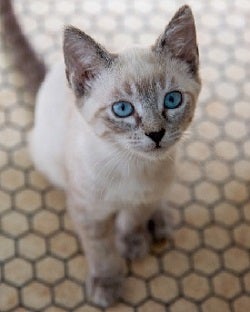 Right now, you might be saying to yourself, “Our staff just don’t have time to provide such intensive treatment, and we don’t have a place to isolate the kittens, either.” Well, I have good news for you! You can solve both of those problems by not hiding those kittens away in a back corner and instead letting the public step up and do the work for you.

Three years ago, the foster-to-adopt concept for ringworm kitties at PACC kicked into high gear when former director Kristen Hassen asked the staff to come up with a way to make sure those cats were no longer hidden from view. She also wanted to make it clear that they were available for adoption.

While the location chosen to house the kittens is in a dead-end row at the back of the public cat kennels, there is no attempt to hide them. Instead, brightly colored, laminated signs point the way to the Fungal Jungle. The signage explains how ringworm is like athlete’s foot and provides a summary of the treatment required. And PACC takes precautions to limit spread should someone decide to handle non-infected kittens after visiting the ringworm area.

“The public is welcome to interact with the kittens in the Fungal Jungle, but they must at least wear gloves if they’re going through multiple kennels and meeting other cats without ringworm,” says Stephanie Stryker, cat programs coordinator at PACC. “They can also opt to put on full gowns, and we explain to everyone that the fungus is zoonotic and requires isolation and frequent disinfection if they decide to take a kitten or two home with them.”

Learn to love the lime dip

Whether medical care is provided at the shelter or in a private foster home, PACC follows the standard industry approach Erin outlined above (oral meds, followed by twice-weekly lime sulfur dips, as well as daily spot-cleaning and deep cleaning twice a week). And PACC was deliberate in establishing a foster-to-adopt arrangement so that they can legally continue providing care.

Of course, the biggest issue with ringworm management is the use of stinky lime sulfur dip. It remains superior to alternative, less smelly topical options because it offers residual activity on the coat, Jennifer says. Plus, cats don’t seem to mind the dip.

“Sure, they turn day-glow yellow for a few hours after dips, but their fur becomes luxuriously soft after a few treatments,” Jennifer says. “I never would have guessed that cats might like a warm, sulfurous bath twice a week.”

Yellow or not, PACC’s experience has been that the public are so enamored of kittens that even the patchy, stinky babies are going home with people.

“I think it only took a few months for adopters desperate for kittens to reconsider taking such kittens as foster-to-adopt cases,” says Jennifer. “Staff and public perceptions around ringworm shifted much faster than I expected.”

Count on the cute factor

Jennifer’s experience with looping the public into the process of caring for ringworm kittens is so positive, she is confident that other shelters will experience something similar.

“I challenge shelters that are leery of putting such kittens in plain view to house a litter of ‘ugly’ ringworm kittens where staff, volunteers and potential adopters can watch them play (but keep finger fomites out!)” she says. 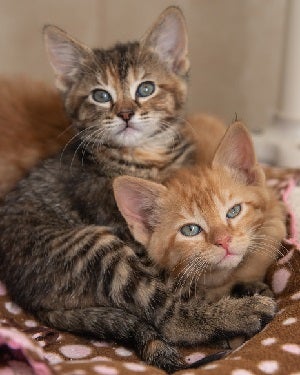 Shelters can also consider launching messaging around the availability of such kittens before the height of kitten season to get some positive reviews on social media. Though Stephanie says PACC really hasn’t had to advertise their ringworm kittens to generate interest.

“We do Facebook postings to let people know that we have kittens available and if they want to adopt one, we are upfront about the care they need,” she says. “If people read that they will need medication and baths, they know there is some sort of expectation. That avoids situations where the public comes in and says, ‘Excuse me; you said you had kittens but there's something wrong with all of them!’”

It's true that these special kittens may not appeal to everyone, but they do draw a certain demographic.

“People in human health care tend to adopt a lot of them,” Stephanie says. “Some have been more hesitant because they work with vulnerable patients, but a lot of them say, ‘Oh, it’s just ringworm. I deal with that all the time.’”

Lastly, ringworm kittens are free for adoption if people do the treatment on their own (with supplies provided by PACC) – and because they aren’t snapped up as quickly as kittens without patchy coats, they’re often the only babies available in the middle of winter.

That sounds like a perfectly lovely gift to me.

Want to learn the latest in ringworm treatment protocols? Check out the Ringworm Management Playbook.