The purpose of this analysis is to provide an exploration of shelter data based on county populations living in rural versus urban areas. Populations in rural areas face different challenges than populations in urban areas, including less access to resources such as veterinary services and shelter services. Counties with higher percentages of populations in rural areas also have lower median incomes and higher percentages of families living below the poverty line. This analysis identifies the challenges and strengths of shelters in more rural settings to inform strategies for supporting these communities in reaching the no-kill benchmark.

The U.S. Census Bureau's urban/rural classification delineates geographical areas as urban or rural by population density. The census bureau assigns each member of the county population as being in either a rural or an urban area. The percentage is the share of the population that is in a rural area.

County urban/rural status has been categorized into four buckets, using the percentage of the county population living in a rural areas. These categories are:

The Best Friends 2020 national dataset provided the shelter-level data for this analysis. More on this dataset can be found in the State of U.S. Animal Sheltering 2020 whitepaper.

Based on the four urban/rural categories, there's a higher percentage of no-data shelters1 in counties with higher percentages of rural populations (41.2% are in moderately to heavily rural counties) than on the Best Friends master shelter list (MSL) overall (33.4% are in moderately to heavily rural counties). There is little difference in the distribution of not-no-kill organizations and no-kill organizations across urban/rural status, indicating that reaching no-kill is just as likely in rural areas as in urban areas.

While the shelters are serving fewer people, intake per capita increases with rural populations.

The CDC's Social Vulnerability Index assigns each county a percentile based on 15 demographic factors that impact a population's resiliency in times of disaster.3 Rurality has not been found to be directly correlated with vulnerability. However, counties with higher percentages of populations living in rural areas and high vulnerability do have higher intake per capita and higher lifesaving gap per capita than other counties, indicating that the counties where these two demographic indicators intersect may require additional support for lifesaving. 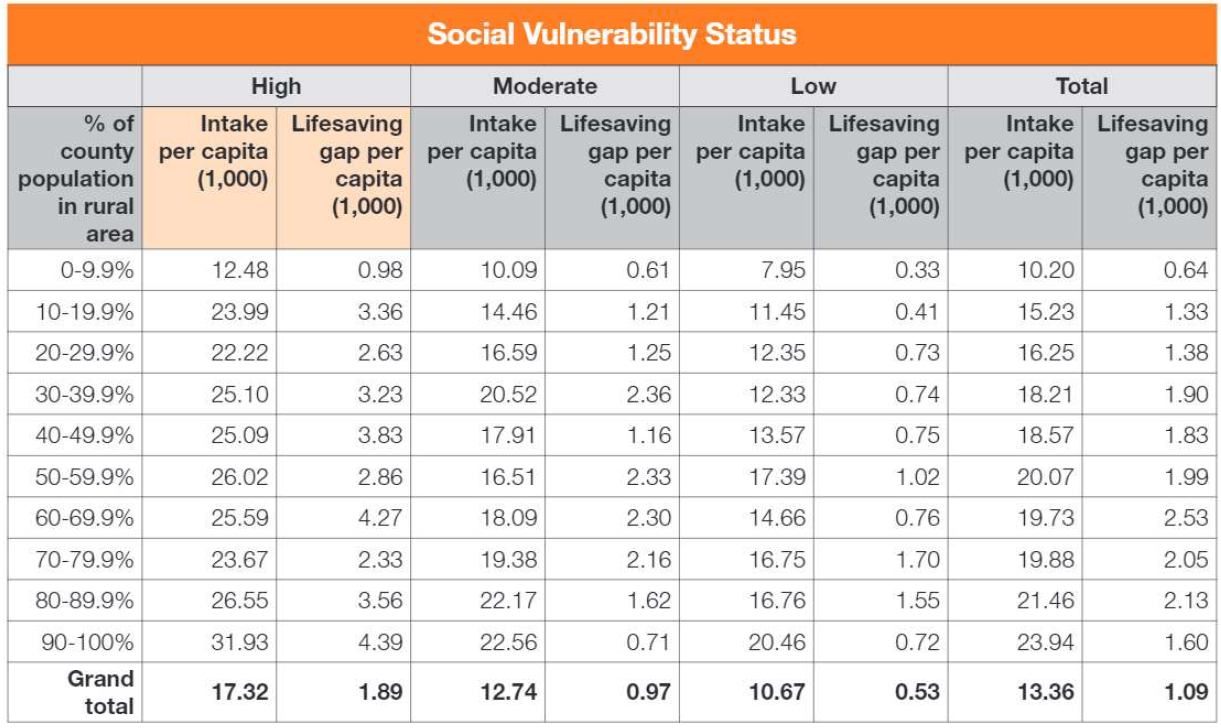 In both canines and felines, total intake decreases as the percentage of rural population increases. Most intake occurs in counties with 0%-9.9% of the population living in rural areas (44.7% of canine intake and 46.2% of feline intake).

Intake types as a percentage of intake vary with rurality. Shelters in counties with more rural populations show strengths in less stray intake and owner-requested euthanasia (ORE) but may face challenges in owner surrenders. 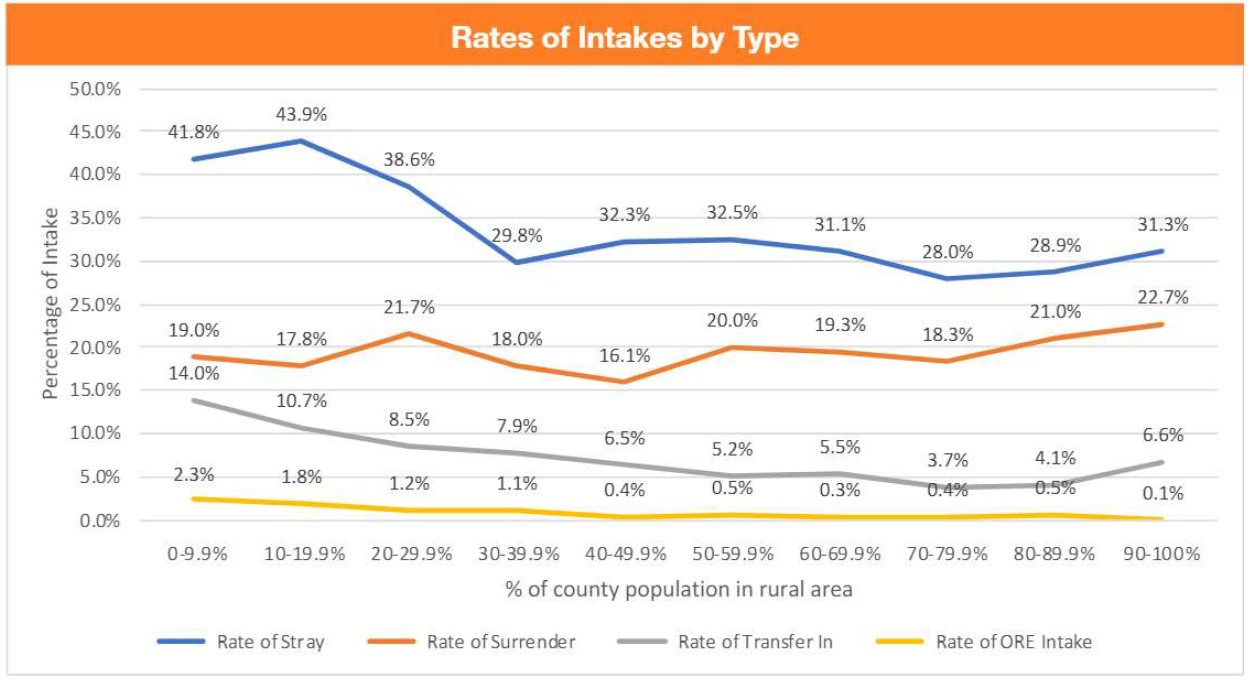 Both live and non-live outcome types as a percentage of intake provide insight into what is happening to the animals who end up in shelters. Shelters in counties with more rural populations show strengths in return-to-owner and transfer-out programming but may face challenges in adoptions and return-to-field (RTF) programming. 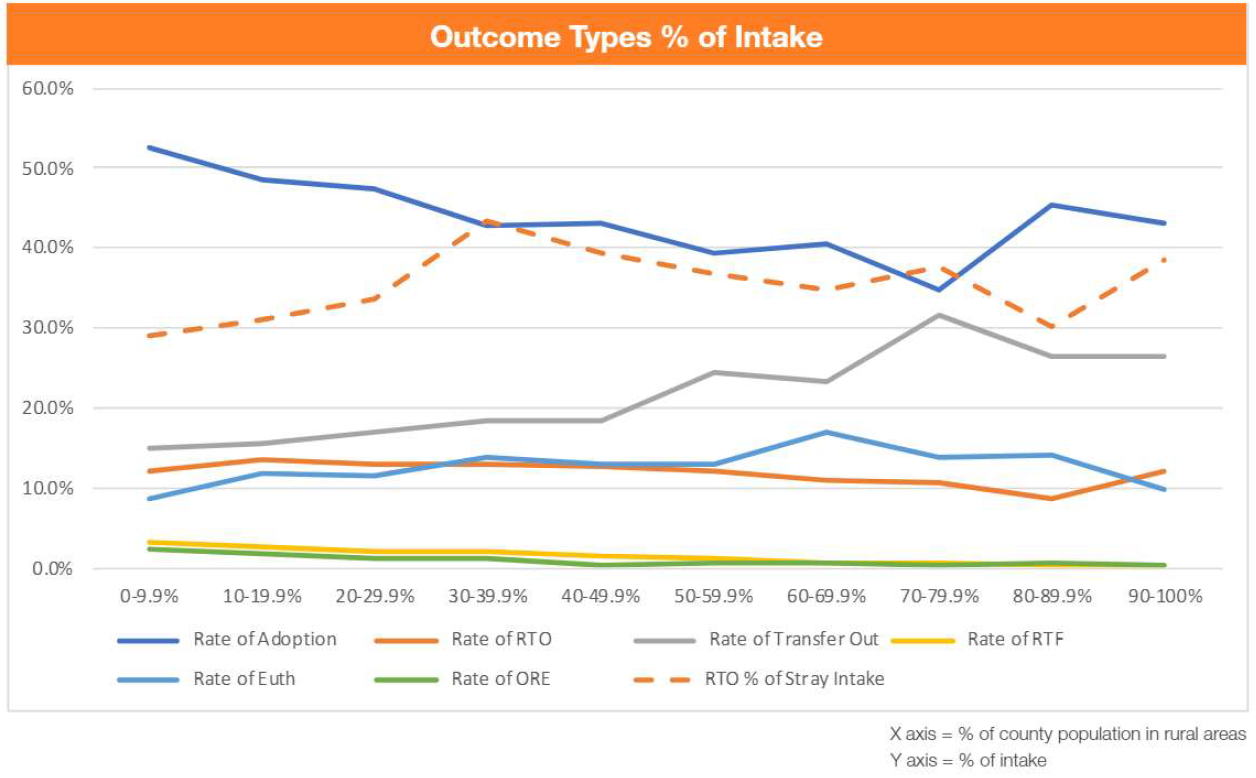 1 No-data shelters are brick-and-mortar shelters for which Best Friends does not currently have data, but that have been accounted for in the Best Friends master shelter list (MSL). The MSL lists 4,404 brick-and-mortar shelters across the country in 2020.
2 The lifesaving gap is the difference between the current save rate and the no-kill benchmark of a 90% save rate.
3 More information on the CDC's Social Vulnerability Index can be found here: https://network.bestfriends.org/research-data/research/human-pet-vulnerability-study