Network partners wrap up 2022 by finding homes for 10,000-plus  animals during the 3-day holiday event

To say we are impressed with the number of adoptions our network partners did in during the four Best Friends National Adoption weekends held in 2022 would be an understatement. In total, more than 35,000 dogs and cats spent the holidays in new homes thanks to those events – and the most recent one, held December 9-11, netted new families for more than 10,000 animals for the Best Friends Lifesaving Centers and 656 network partners that took part.

Since we shared some of the happiest stories from the other events, we thought it was only fitting to do so for the most recent event, too. Here are 10 we selected from the hundreds shared with us this time around: 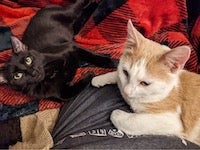 It’s well-known that kittens do better in pairs, so when Ristretto and Bede came to CRHS as orphans found in different parts of the county the shelter wasted no time putting them together. Because they also needed more help than the staff at the shelter had time to give, the new best friends went into a foster home where they spent their days cuddling and causing mischief as they waited for the applications to roll in.

Week after week they waited, until a family showed up at the December event looking for two kittens to take home for the holidays. It may have taken three months, but it was well worth the wait to see these bosom buddies get the opportunity to spend the rest of their lives together.

The Humane Society for Tacoma and Pierce County (HSTPC), Washington 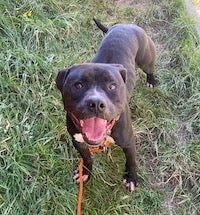 Flapjack was one of 13 dogs who came to HSTPC in May 2022 after being removed from an unsafe environment. Though all the dogs were frightened, Flapjack especially struggled in the shelter environment. Luckily, the staff found him a great foster home where he could relax. It was tough at first, as Flapjack was terrified of every new experience (like going up the stairs). He slowly became more confident and the love between him and his foster mom grew, too. Flapjack blossomed in his foster home – so much so that his foster mom couldn't imagine ever bringing him back.

The Best Friends National Adoption Weekend came at the perfect time to make it official, and the shelter’s very first Name-Your-Price offer during the event meant Flapjack’s foster mom got to add him to her family without having to pay an adoption fee. That seems like a pretty good deal all around. 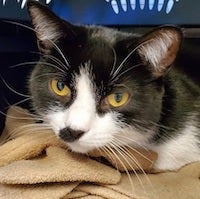 Basil came to CAHS in September with a sad story: his owner passed away and the tuxedo kitty found himself without a home. To top it off, he tested positive for FIV and FeLV. But Basil’s sweet demeanor and overall good health quickly caused him to become a staff and volunteer favorite and they knew he’d find his new people eventually.

During the December event, an older couple and their adult son came in and asked to meet Basil, who they had seen on CAHS’s website. They understood his health diagnosis and simply said that they wanted to help Basil by giving him a loving home. Everyone cheered as his adoption was announced. 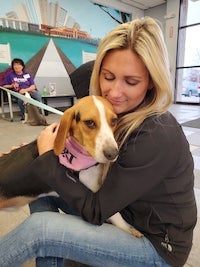 “Right dog. Right people. Right time. We firmly believe that the right dog finds the right people at the right time,” says Melissa Gibson, community relations manager at HFW. “It may not always feel like it happens in the timeframe we’d like, but in the end it all works out for a reason.”

Such was the case for a beagle named Ruckus. A couple came into the shelter specifically looking to adopt a beagle, and although they liked Ruckus, they also were quite smitten with another beagle they met at a different rescue. In order to decide which beagle was the right fit for them, they stepped away, talked it over together and weighed the different qualities and attributes of each dog. And then they made their decision: Ruckus was it.

“He was older, more established and would be a better fit for their lifestyle and their home,” Melissa says. “We want every dog to find a home – not just any home, the right home with the right people at the right time. Ruckus found his during the Best Friends National Adoption event a few weekends ago, and we know the other rescue beagle will find his, too.” 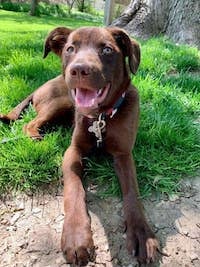 When five-month-old Mimosa came to SCCR from another shelter last spring, her intake exam delivered some not-so-great news: she had a severe heart murmur. Of course, Mimosa doesn’t know her heart is frail. She’s a bouncy, happy puppy who worked on her manners in a loving foster family. She even made friends with all the neighborhood dogs.

“We took Mimosa to a cardiologist and have been taking her for periodic testing so we can provide the most accurate prognosis to her future family,” says development director Christina Morrison. “We were worried that no one would take a chance on a puppy with such an uncertain future, but over the holidays, Mimosa found a new dad who will love her for the rest of her life – whether that’s three years or 12.” 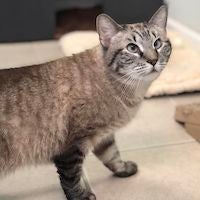 Meredith Grey came to LHS as a pretty pissed-off kitty. Who can blame her, though? She was abandoned in her carrier with a food bowl (but no food) last August, with no way of knowing how long she was alone. Scared and angry, Meredith became “a spicy meatball,” according to development coordinator Ines Rodriguez. The staff was determined to help her trust people again, however, and within a few months they had turned Meredith into a lap kitty.

“Once she warmed up to you, she wasn’t going to let you out of her sight,” Ines says. “The Best Friends National Adoption Event helped Meredith get a second chance at a forever home. One with all the cuddles, a warm bed and all the food she can eat.” 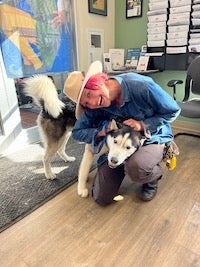 Longtime resident one-and-a-half-year-old Hunter the husky showed up at the Colorado shelter after escaping his yard one too many times.

“His family didn’t have the time or patience to train him or fix the fence,” says Rhiannon Rowe, ECASE’s shelter manager. “He also hadn’t been handled much, or walked, so you could barely touch Hunter when he first came to us. To top it off, he was a resource guarder.”

The team at ECASE knew that, deep down, Hunter was also a very good boy who had just been handed a rough start in life. True enough, after spending a lot of time working slowly with Hunter, he transformed into a love bug who enjoyed snuggling. And finally, his “perfect fit” showed up.

“A woman came in that recently lost her Husky and fell in love almost immediately,” Rhiannon says. “He loved her, too, and she told us that her dogs are her family and that he would be loved and by her side all the time!” 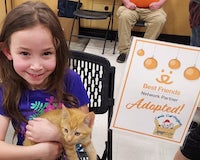 CCP shared a lovely story about a pair of kittens who were adopted during the December event:

“This adorable young lady came in with her family to adopt two kittens – one for her and one for her mom (Dad already had his cat) – and her excitement was contagious,” says Teresa Belles of CCP. “She held and cuddled Toby like he was the only kitten in the world.

“When it came time to sign the contract she wanted to sign since Toby was going to be her kitty,” she continues. “Because of her age she couldn't sign, so we added a line stating she will always love and take care of her kitty and had her sign her name. She was beaming. It was an adoption that had everyone smiling.” 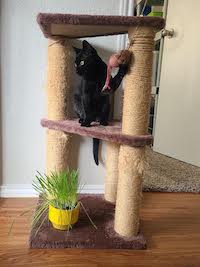 A family brought PJ into VCA Oso Creek Animal Hospital and Emergency Center in Corpus Christi because she was having seizures. She was rushed to the back where vet staff found she only had a slight upper respiratory virus. When they went to talk to the family, however, they were gone. They had abandoned PJ.

“We work closely with Oso Creek and the vet that took care of her reached out to us for placement,” says Samantha Person, Cattery Inc.’s executive director. “PJ is such a sweet kitty and the staff at Oso Creek fell in love with her while she was in their care.”

The public fell in love with her, too, and she was snapped up by a family during the special adoption weekend. Her new people even sent a follow-up note about how much they love her, and that she has claimed every lap in the house (and the entire house). She was renamed Tribble because “she makes a cute little trilling sound that reminds us of the tribbles on Star Trek.” 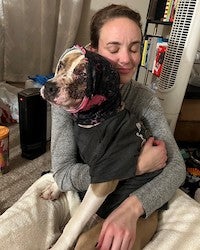 Gemma’s story is another’s happy outcome wouldn’t have been possible without many more people banding together to help her. The two-year-old mixed breed dog came to MADACC after being intentionally set on fire, which left her with extensive burns to her head, face and left shoulder. Gemma was placed in foster with a new foster parent who was actually an oncology and emergency vet.

“Between the treatment that our shelter vet provided and the care that the foster provided, Gemma recovered so much faster than anyone anticipated,” says Kate Hartlund, MADACC’s outcomes coordinator. “Gemma was officially adopted by a co-worker of her foster mom and gained a four-legged brother in the process.”

We can’t think of a better way to end 2022, and ring in a new year full of hope and promise for animals around the country.