Where, oh where has my little dog gone?

If you’re like an estimated 33% of all people who share their home with a dog, odds are you will come home one day to the sickening sight of a wide-open front door or back gate and your beloved canine companion nowhere in sight. For most people faced with this gut-wrenching situation, the first step is to contact the local animal shelter or rescue—not just to see if their dog showed up, but to ask for advice on how to find them if they haven’t.

That’s because we’re experts. Advising people to paper the town with flyers, talk to neighbors, and post on social media are still the cornerstones of reunification efforts and responsible for many happy endings. For the past several decades, a handful of individuals have also dedicated themselves to identifying which techniques are most likely to result in success (and why) and then spreading such information far and wide—including, of course, to those of us in the animal welfare field.

Look to the experts to upgrade your resources

Kathy Pobloskie was inspired to co-found Lost Dogs of Wisconsin (LDW) over a decade ago while she was volunteering at the front desk of a local shelter.

“I saw terribly distraught people calling in when their pet went missing,” says Kathy, who is also LDW’s director. “The only advice they got was to bring in a flyer that could be added to an over-stuffed loose-leaf binder and a bulletin board in the lobby, both of which were rarely updated.”

She also realized many lost dogs got lost a second time within the animal shelter and rescue system.

“People who find dogs often don't want to take them to the city animal control because they're afraid of the outcome,” Kathy says. “Instead, they drive them three hours away to a ‘better’ shelter or rescue.

“If I lost my dog, he could potentially go to one of six different agencies and there’s no cross-communication,” she continues. “How on Earth is someone ever supposed to track down their lost pet? I knew there had to be a better way.” 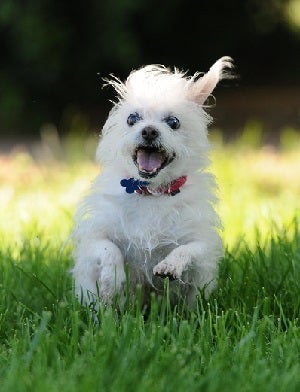 Kat Albrecht, founder of Missing Animal Response Network (MARN), was driven to discover a better way to find wayward pets after her police bloodhound A.J. dug out of her yard one day in 1997 and disappeared into the woods. She was able to use another search-and-rescue dog to track him down, leading to an a-ha moment that inspired her to start training people to use dogs to track down lost pets.

That initial work evolved into what she does today, which is to coach individuals and organizations on how to use a blend of law enforcement techniques, knowledge of dog behavior and what she’s learned from decades of experience to reunite more lost dogs with their people.

“Just coaching people over the phone often is enough to help them get their animal back,” says Kat. “I help owners figure out what happened when their dog got loose. Then we try to profile the dog and look at the factors that can influence how far he might travel, like weather or temperament. Finally, we come up with what they need to be doing right away for the best chances of a reunion.”

The initial step towards a reunion is the hardest: people need to calm down.

“We see many cases where a pet owner is so overwhelmed by grief or panic, they believe they’ll never see their dog again,” Kat says. “They assume he was killed by a predator or stolen. Those emotions are hugely detrimental to somebody trying to find a missing pet.”

“Alleviating those fears early on is a big part of what we do, too,” says Kathy.

“The fact is that dogs rarely freeze to death, starve to death or get eaten by a coyote. In fact, an amazing number of dogs will come home on their own.”

People can improve those chances by initially taking advantage of a well-known dog trait: their excellent sense of smell.

“Put out food right away and at the same place every day to get the dog on a regular feeding schedule,” Kathy says. “And while it doesn’t work for cats, dogs have an incredible sense of smell and will come back if they smell their blanket or some of the owner’s worn clothing left outside.” 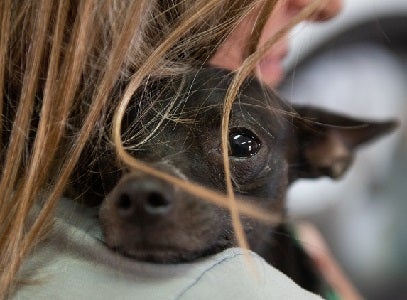 Even when dogs do return, it’s important to remember that they are likely to be stressed and unlikely to respond even to the sound of their person’s voice. People need to take it slow, which means never calling the dog or chasing after him—advice that Kat acknowledges seems counter-intuitive.

“It doesn't take much to send a frightened dog into the fight or flight mode,” Kat says. “If too many people have already tried to capture the dog, calling him becomes a trigger that can cause him to run away.”

Kat recommends that people focus instead on calming the dog by crouching or lying down, not looking at him head-on, and otherwise making themselves as unthreatening as possible. Then use high value treats (e.g., strong-smelling and tasty!) to entice the dog into getting close enough for them to put a slip lead on.

“I also recommend that you make lip-smacking ‘nummy’ sounds as you're tossing treats towards the dog, which helps bait him to come towards you,” Kat adds.

Spread the message far and wide

In most lost dog cases, owners are looking for people who have found their dog or have seen him and know where to search. That means they need to advertise their lost dog, and the use of flyers is integral to getting in front of as many eyeballs as possible.

“The number one thing we preach is flyers, flyers and more flyers,” Kathy says. “If I look at the 145,000 reunions we’ve facilitated over the years, using flyers was the primary thing that got those dogs home.”

Putting flyers on bulletin boards and in lost pet binders at the shelter is useful, but only if they are kept updated and organized. While one copy of the flyer should go in the lobby, remember that employees often don’t come through the front door. Post another copy someplace where staff gather. 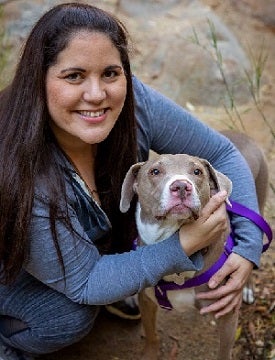 “People should walk around the neighborhood and/or wherever the dog was last seen and hand out flyers to people walking their dog, the garbage man, even the Amazon Prime driver,” Kathy says. “They also have to knock on doors, because making an emotional connection is what will make someone remember if they see the dog.”

Remember to let the public know that no matter where people put up signs or flyers, they need the property owner’s permission. Kathy also stresses the importance of not stapling or nailing signs to utility poles.

“Those poles are private property, and tacks and staples are a safety risk to lineworkers who have to climb them,” she says. “And always remind people to take down flyers after the dog is found.”

Kat also suggests using large neon posters to catch people’s attention. People can recruit friends to hold up the signs at intersections near where the dog was lost and at peak-traffic times. Writing a message on their car windows with wash-off marker and parking it at a busy store is another way of reaching the masses.

Employ the tools of the trade

Most shelters these days are entering photos and detailed data (where found, when) in their databases, but make that info available to the public. You can post it on your Facebook page but do so on the more-visited main page rather than a dedicated lost and found page.

Encourage people to post in the national database Pet FBI or consider offering mapping services for posts. Other shelters are using facial recognition technology and searchable national databases through such companies as Petco Love Lost (formerly Finding Rover). By some estimates, when front-facing images of stray dogs are entered in the database, reunification rates have been as high as 98%.

The use of microchips is becoming more common, so any dog found as stray should of course be scanned. (And scanned several times, as the chips have been known to migrate away from the typical insertion site near the neck.) Some pet owners are taking it a step further and using GPS trackers on their dogs just in case they go astray.

Lastly, both Kat and Kathy can’t stress enough how useful surveillance cameras and humane traps are catching lost dogs. Shelters can consider loaning out such devices with a deposit or keeping a list of area organizations that do so. There are also free instructions online to make a Missy trap as an alternative to a commercial version. And shelters should really recruit volunteers to help the public at all stages of the process.

“There have been many times where animal control has asked our volunteers for help and our volunteers love doing midnight stakeouts at trap sites,” Kat says. “It’s even become a hobby for some.” 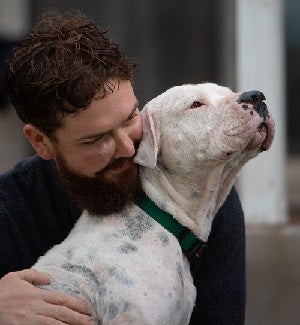 Shelters and rescues are in the best position to help people facing a very distressing situation, and they don’t have to continue handing out the same old advice or rebuild their resources from scratch. LDW and MARN’s websites have tips, case studies, research findings and links to other resources that shelters can use to update their info.

Both organizations also are building national, mostly volunteer-run resources where people can be referred for help outside of the local shelter system. MARN has a national database of people who consult with pet owners on their lost animals, while LDW expanded its work and founded Lost Dogs of America, a network of Facebook pages in all 50 states.

“Our purpose is to disseminate good advice to other lost dog organizations or to inspire people to start them,” Kathy says. “Really, we just want their work to result in the most reunions possible.”

Kat seconds that, noting that MARN and LDW’s work is inextricably linked with the day-to-day work of animal welfare groups.

“Our work is not just about helping animals and people reunite; it’s also about helping them from entering into a shelter in the first place,” Kat says.

“If shelters and rescues can share what we’ve learned about the most effective techniques and tactics, more people will find their missing pets before they ever enter the system. That saves money and spares the animal from exposure to diseases and stress in the shelter.”

And it will go a long way toward alleviating the fear of animal shelters that drives stray finders to take them hundreds of miles away from their families. Somewhere, 33% of pets and people in the country would be eternally grateful for that kind of progress.