We’re familiar with partnerships among animal shelters and rescue organizations—in fact, we wrote about how to build those partnerships last week. But more and more frequently, unique partnerships between businesses outside of our industry are cropping up to assist with our goal of helping animals find homes. (Just think about all those cat cafés scattered around the world.)

We found three great examples of how businesses are working to support shelters both financially and operationally so that more animals can go into loving homes. You may not be able to replicate these in your community, but maybe you’ll be inspired to reach out to businesses in your area to explore potential opportunities.

Say you’re in Spokane, and you’re torn between finding a place to sit outside and enjoy some local beers or going to the Spokane Humane Society (SHS) to look for a new furry family member (hey, it could happen). As it turns out, you can do both in one place: Bark, A Rescue Pub. (Not to mention, you can bring your own pup to their outdoor dining patio.)

“We were out for drinks at a local brewery and there was a group of guys at the bar talking about how one of them wanted to open a brewery that also had adoptable dogs there,” says Josh Wade, who co-owns Bark with Katie Holmes. “I thought it was a great idea.”

The pair then found an abandoned restaurant in a historic building in downtown Spokane that seemed perfect for the concept.

“There was an area in the basement that was just being used for storage. I could see that with a few modifications, we could turn it into an animal rescue space,” Josh says. “We built out five large and four small dog kennels, and space to house about a dozen cats.”

Bark opened in mid-August 2020 and was doing great—until COVID put a dent in their plans. 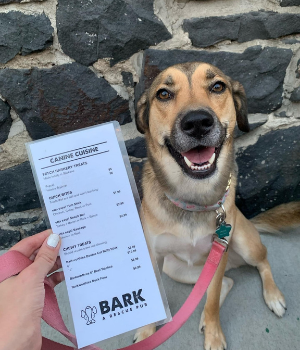 “We couldn't have anybody dining inside of our restaurant from November 15th through Valentine's Day,” says Josh. “So, we put up some outdoor heated dining tents called igloos and those kept us going through the winter.”

To date, Bark has adopted out 627 animals. It has also donated more than $30,000 to SHS, raised through a $1 donation per every Tito’s vodka drink or house wine every day, and $1 for every item purchased on Wednesdays. The pub also charges a fee to visit the adoption center, which goes to pay the staff who care for the animals.

“A certain percentage of people are committed to adopting a shelter animal but coming to the shelter is unnerving for them. It's not always a warm place,” says Gail Golden, SHS’s director of marketing and development. “Allowing them to go to a different environment has increased adoptions, and it’s so wonderful that Josh and Katie are absolutely committed to our mission and our vision here and helping as many animals as possible find forever homes.”

Last year we showcased some of the fun art created to support various Network partners, but Alix Frazier has taken the concept of capturing the spirit of our beloved companion animals much further.

“I started PawsWithCause after I lost my mother to Alzheimer’s disease,” she says. “Before she passed away, I was trying to find things to do with her that would (selfishly) build memories for me, but also give her back her authority, her agency, her ability to feel like she had a purpose.

“We had started painting together, and just had a lot of fun doing it, even though neither of us knew how to paint. That didn't matter, though, because it wasn't the goal.”

Eventually, Alix and her mother tired of painting flowers and barn doors and turned to their personal animals—adopted from shelters—for inspiration. They found that much more fulfilling, and after her mother passed, Alix used that inspiration to start her organization.

“I had this big hole in my life. I needed to be back with people like her, people who needed something in their lives,” she says.

Once Alix started taking her idea into assisted living homes, using images from local shelters to create templates that can be painted, she realized that the resulting masterpieces could be sold to raise funds for those organizations. 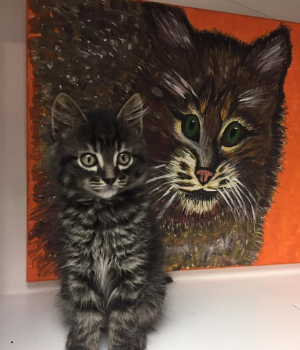 Now she takes her program into all kinds of places, working with low-income children, individuals with disabilities, and people who are experiencing homelessness. She has also created the “Sit, Stay ‘n Play” painting kit that people can purchase for $25 and the Paws Park Pack, which is a picnic box for dogs. Funds from those sales have been earmarked for spay/neuter support.

The paintings created by participants in the program are on display in local vet offices, in animal supply and pet supply stores and grocery stores. In fact, that’s how one recipient of support from PawsWithCause found out about the organization.

“I didn’t even know about them until a potential adopter told us there was this painting of two of our adoptable goats, Cookie and Blanche, in a local grocery store,” says Stephanie Perciful, sanctuary director for Pasado’s Safe Haven, which rescues companion and farm animals from cruelty or neglect. “He not only adopted the girls, but he also bought the painting of them.”

In another case, Stephanie was able to purchase a painting of one of their special needs horses, Annie, who lives at a veterinary facility.

“I gifted that to the vet who cares for her every day, and it was lovely to be able to purchase that as a fundraiser that went back to Pasado’s and for our vet to have this wonderful painting of her,” Stephanie says.

“It's so helpful for us is because our residents are primarily victims of cruelty and neglect, and because of that our facilities are not open to the public and adoptions are by appointment,” she adds. “This gives us a chance to reach an audience we might not have had otherwise, and that is vital to getting our animals into homes.”

“People who've never painted in their life before found that they were getting a lot of joy out of it and a lot of confidence,” Alix says. “A woman with Alzheimer’s approached me and although it took her a few minutes to put all the words together, she said ‘This makes you feel like you're more than you thought you were’.”

A lot of organizations participate in transport programs to assist rural, under-resourced animal shelters. But what would happen if those shelters sending animals to others for adoption were able to make over their facilities, which would improve the level of care and create a more welcoming environment for potential adopters?

That’s the issue Gigi’s decided to tackle with its unique resources. The Columbus, Ohio-based organization was founded in 2018 by George and Tina Skestos, founders of the building company Trinity Homes. That gave the organization a leg up because they had access to construction resources.

Gigi’s campus features 26,000-square-feet dedicated to everything from two surgery suites, an x-ray and lab, and a pharmacy; to four living-room kennel areas, five outdoor areas, a large indoor exercise arena, and a walking path; to a dedicated isolation unit and a behavioral evaluation space. The organization has three veterinarians on staff including a board-certified veterinary behaviorist, which enables them to help more than 6,300 homeless dogs each year. But their shelter partners are operating in far less plush facilities.

“You wouldn't believe the shape some of our rural partners' facilities are in,” says Jim Phieffer, Gigi's board president and CEO of Trinity Homes. “We knew we could invest some of our time and expertise to make these facilities healthier for the dogs, more efficient for their staff, and more effective in their communities.”

“It enhanced the health of all the dogs in their care and strengthened the entire dog sheltering network,” says Jim. 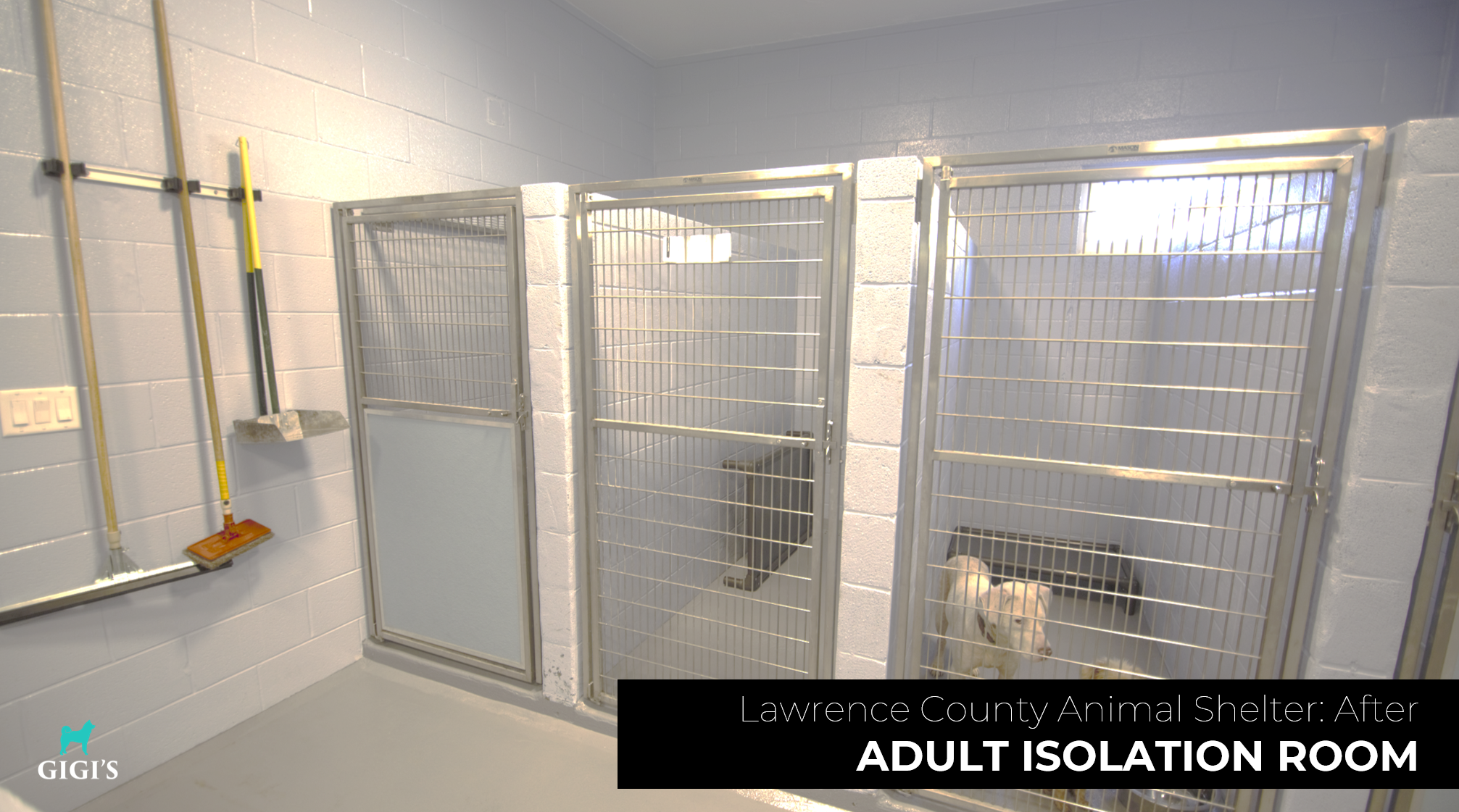 Gigi’s also donated a $150,000 upgrade to the Lawrence County Animal Shelter, which was operating out of a 30-year-old facility.