In 2010 a judge put an injunction in place that prevented the city shelters in Los Angeles from not only performing any trap, neuter, return (TNR) but also barred them from talking about it with the public. The injunction was a result of a lawsuit filed by a group of people who were concerned about the impact community cats were having on wildlife.

Since TNR is the only humane method of effectively reducing community cat populations, the injunction only served to worsen the problem it sought to address. But this week, in a unanimous vote, the L.A. City Council approved a 716-page report that is a big step towards making TNR an official policy of Los Angeles Animal Services.

A lot of work lies ahead, but we should take a moment and celebrate the opportunity that now exists for both the cats - and wildlife - of the City of Los Angeles. 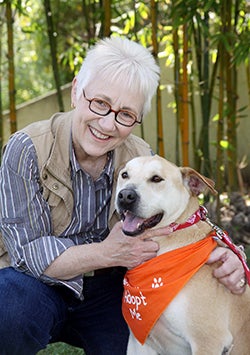 Brenda F. Barnette has been general manager of Los Angeles Animal Services (LAAS) since August 2010. LAAS is one of the largest municipal shelter systems in the U.S., with six shelters serving approximately 60,000 animals annually and responding to 20,000 emergency calls each year involving animals or people in danger.

With over 20-years of success in developing resources and programs to save the lives of animals, Brenda has earned a reputation as a positive change manager. In Los Angeles, she collaborated with Best Friends to develop a unique public/private partnership (NKLA) to save the lives of thousands of companion animals.

Brenda previously served as CEO of the Seattle Humane Society, increasing the save rate from 77-percent to 92-percent in four years. She has also been the CEO of Tony La Russa’s Animal Rescue Foundation, the executive director of Pets In Need and the development director at the San Francisco SPCA.