It's the return of the Best Friends National Conference! Animal welfare professionals from across the country (and beyond!) have made their way to Raleigh, North Carolina, for our first in-person conference since the pandemic forced the cancellation of the 2020 event.

This year we're in Raleigh, North Carolina. Like the previous host communities, such as Atlanta, Dallas, Atlantic City, and North Carolina are important to the animal welfare movement.

We can't tell North Carolina's story in just one episode, but with the conference kicking off today, we thought we could offer a little context about the state and its lifesaving story. To learn more, we spoke with native North Carolinian John Graves, a strategist for the east region at Best Friends. 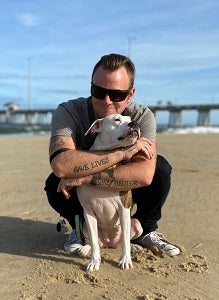 Throughout his life, John Graves has lived and worked in the state of North Carolina, from the Appalachian mountains to the Atlantic coast.

John began his animal welfare career in Manteo as an animal services officer in 2006. John went on to become kennel manager, then executive director, and has filled every role in between, all within open-admission shelters.

John is dedicated to creative and progressive animal welfare practices with an exceptional passion for enrichment and community relations. He believes It takes a village to best serve the animals.