A few weeks ago, we told you about a dozen organizations who received $5,000 grants from Best Friends and Maddie’s Fund® in honor of the resiliency they demonstrated this year. We chose them based on the inspiring stories they shared with us, but there were many other submissions that are equally deserving of recognition.

While we couldn’t provide grants to the more than 150 groups who told us about how they overcame challenges and saved lives even in the face of COVID’s many challenges, we did want to share more of their stories with you. So in the spirit of Thanksgiving week, when we like to remember all the things we’re thankful for this year, here are six tales of happy endings for cats and dogs from some of our Network partners.

Eye on the Prize 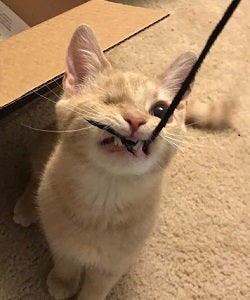 When a kind family in Frederick, Maryland, discovered a young kitten in their barn with a badly infected eye, they wasted no time rushing him to their vet. The vet confirmed the kitty needed the eye removed, but the family couldn’t commit the time or resources to help. Unwilling to euthanize the three-month-old cream-colored kitten, the vet called Frederick Friends of Our County Animal Shelter (FFOCAS) for help. Of course, the organization agreed, and the surgery went off without a hitch.

But the kitty—now named Pirate, or Pi—wasn’t done facing medical difficulties. Somehow, he managed to sustain a minor wound that became infected, first affecting one hind leg, then the other, and then the space underneath Pirate’s removed eye. For two months, Pirate battled against the infection, at one point even coming close to losing one leg. Through it all, Pi's larger-than-life personality shone through.

“He never stopped playing, had a healthy appetite and won the hearts of all our followers and supporters,” the organization says. “And finally, he won the heart of Joanne, who, understanding Pi's border collie-like energy level, was happy to adopt not only Pi but also his buddy Jack.”

Bouncing Back from COVID Tragedy 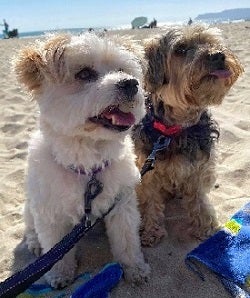 People aren’t the only ones who have suffered due to COVID. Last year, Cody and Oreo lost their dad to the disease and then lost their home. When they arrived at Domino Effect Animal Rescue (DEAR) in Temecula, California, the pair clung to each other for comfort. Although it is harder to adopt out a pair of dogs—especially when one is 12 years old and deaf—DEAR did not want them to lose one another after what they had already been through.

Eventually, the perfect person came along: a man who lived with his mother in a house he had just purchased and who wanted to adopt a couple of fuzzy companions to make his home complete. It turned out to be a perfect match and Cody and Oreo love living in a quiet house where they get all the attention and snuggles again. 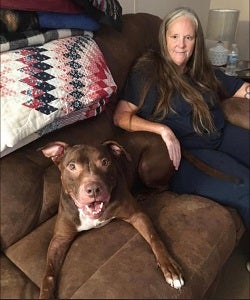 More than four years ago, Archie came to Animal Aid of Tulsa (AAT), Oklahoma, in bad shape. He had purple skin that appeared to have been burned when someone poured motor oil on him. Rather than being an act of cruelty, AAT believed it was a misguided attempt to rid Archie of bugs or mites.

Whatever the reason, the decision set Archie up for a lifetime of skin issues, which require a special diet. He also ended up living with an animal behaviorist, because boarding at the vet clinic was too much stress for him and because he was reactive to other animals. It was a long haul, but after 1,566 days, Archie finally went to a new home.

“This is what it’s all about, why we do what we do,’ AAT says on its Facebook page. “We did everything we could in those 4 years to make sure he was happy and comfortable but it’s nothing compared to his own momma, house, bed, couch and love of a family.” 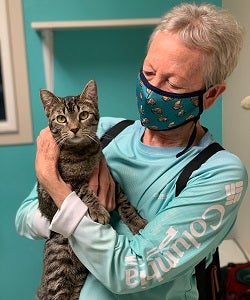 Cat Adoption Team (CAT) in Sherwood, Oregon, is no stranger to managing FeLV-positive cats. But this spring, CAT’s staff and volunteers really fell hard for Dusk, Zinius, Luna and Thorn, four FeLV-positive kittens the group took in from a rescue group. Though Dusk was adopted quickly into a home with another FeLV-positive cat, because of their special needs, it was taking the remaining three longer than usual to find the right homes.

The CAT team got extra-creative to help each one find love. In addition to launching a #TabbyTakeover social media campaign, staff and volunteer advocates told everyone they knew (and many they didn’t) about the trio, who were fostered together by CAT’s partners at the cat café Purrington's Cat Lounge. In the end, all four of these adorable tabbies ending up with families who refused to be deterred by their health condition.

From Pudgy to Perfect 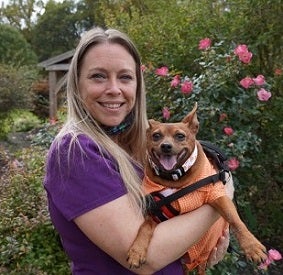 Miniature pinschers typically weigh eight to 10 pounds, but Chester was nowhere near that when he was found wandering the streets by Animal Rescue League (ARL) of Berks County, Pennsylvania. He tipped the scales at 28 pounds, so heavy that it was hard for Chester just to support his own weight while trying to stand.

The staff at the ARL pulled out all the stops to help the pup with his weight loss journey, combining a special diet with an exercise regimen, treadmill hydrotherapy treatments and even laser therapy to reduce his joint pain and inflammation. Heck, Chester even started his own blog, The Chester Chronicles, to keep fans apprised of his progress.

After four months of hard work, Chester has lost 10 pounds—and gained a forever home with his therapist, who will be by his side every step of the way on his journey to health and happiness.

From Underdog to Superhero 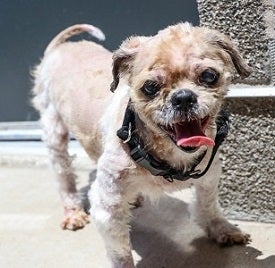 An 11-year-old shih tzu named Simon took the unfortunate honor of being the worst matted case they’d even seen when he showed up at Missouri’s Kansas City Pet Project (KCPP) in Missouri. KCPP’s veterinary team worked for two hours to shave off 6.5 pounds of matted hair; the neglected senior also needed a dental surgery.

But the work didn’t stop there. KCPP managed to spread Simon’s story around the world, getting him featured on CNN and Headline News, along with hundreds of other news stations, social media channels, and more. All the publicity worked, and Simon went home with a couple who have three shih tzu girls already. Since all their pets are named after X-Men characters, Simon was renamed Logan.

His new family reports, "Our little guy is such a sweetheart. We both knew as soon as we saw that video that he belongs with us. And the second we laid eyes on him in person, we were both all in."