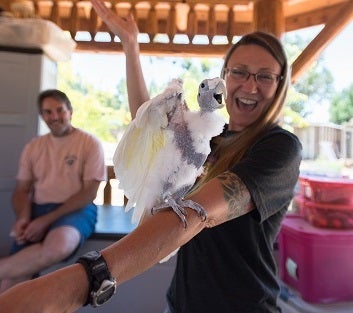 Lisa grew up in Minnesota, earning a Bachelor of Arts degree in legal studies from Hamline University. After graduating, she moved to Seoul, South Korea, where she taught English as a Second Language (ESL) for nearly six years. She also fed her travel bug by traveling throughout the far east and spending time in more than 10 countries. She returned to Minnesota where she spent the next decade working in mortgage banking, as well as for a global, computer-based, educational testing company.

As a life-long animal lover, fundraiser and volunteer, Lisa began seeking an alternative to the corporate world to be able to bring her passion for animals to life. After discovering Best Friends Animal Society in a Vegetarian Times magazine, she decided to visit Kanab, Utah. Volunteering at Best Friends led to a second visit where she earned a general animal care certificate after completing the six-week internship program. On her third visit to the sanctuary, she became an official employee, spending the following couple of years working as a lifesaving and care specialist in Cat World. She then moved to the Parrot Garden, where she began her personal quest to learn everything avian. Eventually, she became the avian vet tech and provided daily medical care and treatment for more 150 parrots, performed medical procedures with the sanctuary veterinarians, and assisted globally renowned avian veterinarians in Salt Lake City. Being an educator at heart, she often wrote avian articles for the local paper, provided information for Best Friends web and magazine and conducted daily educational tours to the public on more than 350 parrot species.

After nearly 10 years in animal care and lifesaving, Lisa joined the development side of Best Friends on the donor relations team where she processed incoming monies for the corporate relations, workplace giving and foundation partnerships teams. Invaluable experience gained over the years in that role afforded her the opportunity to learn more about foundation grants, which led to her recently becoming part of the Network operations team, with a focus solely on grants.

Lisa's travel bug continues to take her to exotic destinations where she can immerse herself in cultural delights. As a self-trained vegan cook, she provides delicious meal alternatives to friends, co-workers and the community. In the meantime, she works from home in Kanab where she lives with three cats and of course three talkative parrots who can be heard in the background of nearly every team meeting. Squawk!