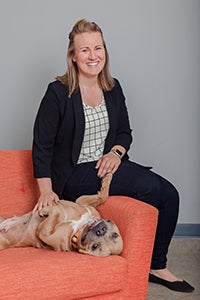 Kaylee Hawkins is the regional director of the Pacific region for Best Friends Animal Society. In this role, she is working to help achieve a no-kill nation by 2025 by collaborating with leaders in the western region to improve the save rate along the Pacific coast. During Kaylee’s career with Best Friends, she has helped open the doors at two Best Friends pet adoption centers and one pet resource center through Best Friends Los Angeles programs. Additionally, she helped establish lifesaving initiatives through coalition, foster, volunteer, transport, adoptions, events and outreach, in-shelter lifesaving and admissions programming. In collaboration with Los Angeles Animal Services and the 140-plus NKLA Coalition partners, Kaylee was able to help bring the save rate for one of the country’s largest animal sheltering systems to 89.7 for 2018. Kaylee’s career in animal welfare began in a marketing capacity with a partner agency in the Los Angeles area. Kaylee joined Best Friends in 2011 as the volunteer coordinator for the Los Angeles team, and quickly moved through the ranks to help establish new lifesaving teams.