Kitten season is well underway around the country, and Network partners are implementing all kinds of strategies to cope with the influx. If your organization hasn’t tried a “Don’t Kit-Nap Kittens” campaign, they are very effective at educating people about the fact that many “orphaned” kittens are not orphaned at all and have the greatest chance of survival if they are left with mom. For those neonates that do end up at the shelter when people find them, the most promising programs are those that ask the public to play a significant role in caring for these most fragile beings.

Neonatal kittens are hard for shelters. They take a lot of time and resources to save, and even then have high mortality rates in a shelter environment. Many animal welfare organizations are happily surprised to find that people are often willing to foster if they have some guidance and some supplies to get started. Whereas a shelter understandably might not have the budget to provide those supplies, nonprofit organizations can often step in to provide them instead. 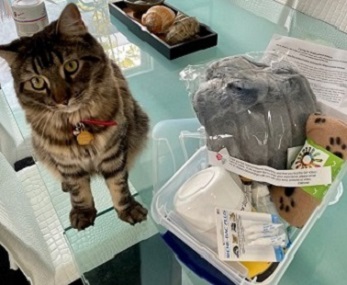 CatPAWS started off in 2010 as a foster-based organization that pulled cats from LBACS. As happens with many rescue groups, however, eventually the group’s space and resource limitations didn’t match up with the need.

“At the time they were killing a number of kittens that was simply unacceptable to me—and also to them, I’m sure,” says Deborah Felin, CatPAWS co-founder and board member. “People would flood in all day every day with a box of kittens they’d found. If they weren’t eating on their own and no rescue could pick them up within an hour they went straight to the back. I was desperate to do something.”

That “something” ended up being the creation of kitten kits. The kits cost between $55 and $60 and consist of plastic bins filled with powdered formula, bottles and syringes with miracle nipples, a tube of the probiotic Benebac, and a warming disk or hot water bottle with a fleece cover. They also come with a guide on how to care for unweaned kittens and a list of online resources. Deborah also stresses that each shelter needs to include information about how to get spay/neuter assistance when the kittens are old enough.

“They aren’t intaking the kittens, so they should put some mechanism in place to track them and make sure they are altered,” Deborah says. “It’s not our intention to save a bunch of kittens then have them grow up and make more at four to six months of age.”

Since the kittens are not part of the shelter’s intake or euthanasia data, it’s difficult to quantify how many lives are saved through these programs. Organizations that do these kinds of kitten diversion programs know, however, that a lot more of them survive simply by avoiding the stressful realities of living in a shelter.

“It’s true that the mortality rate for neonates can be high, so shelters need to be upfront with the public and stress that at least those babies are being given a chance,” Deborah says. “And people become so invested that many kittens are adopted by their foster families or to friends. They never come back to the shelter at all.”

Overcoming the Fear of Change

Whether it’s because they don’t believe people will agree to take kittens home, think people will never get them fixed, or are afraid to be transparent about how many die in the shelter, some animal welfare organizations are leery of implementing such a program. But kitten programs that enlist the community as a solution are not “a bizarre concept, they are a proven model,” according to Denise Woodside, executive director of SEAACA, which began getting kits from CatPAWS in March. 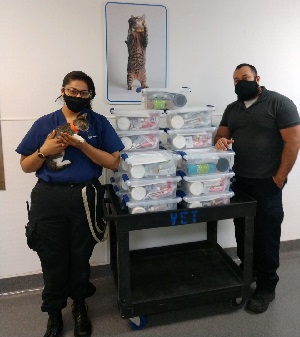 “You will not be the first shelter sticking your neck out and trying it,” says Denise. “There are plenty of others who have done it and have seen an incredibly positive impact on the feline population, on their staff and on members of the community.”

Because SEAACA already had a kitten foster program in place with community partners, the staff knew the kind of positive outcomes that could occur by focusing on getting those babies out as fast as possible. They even made sure to stock them on the animal control trucks for field services personnel to distribute.

“They just saw this as another tool to empower the community to be part of the solution,” Denise says. “And who doesn’t want to help a fragile, absolutely adorable kitten?”

Of course, implementing this kind of program is no different than making any changes to your policies or procedures: it threatens the status quo.

“Change implies that what we’ve been doing up to now is wrong and no one wants to feel like they could have been saving kittens instead of killing them all this time,” Deborah says. “But when you know better, do better. Forgive yourself, allow yourself to recognize that you did the best you could at the time, and allow what has been done up to now to be dislodged by a better way.”

In our April podcast Community-supported kitten care, LBCAS director Staycee Dains provided a great piece of advice to help shelters overcome that fear of asking the public to change their expectations: remember that shelters make the rules.

“We have this power to tell people what to do and how things work; we’ve done it for years,” she says. “People will listen to us because we are coming from a place of knowledge and understanding. It’s not about saying, ‘if you could do this, or if you wouldn’t mind’… it’s ‘let me tell you how to do this’.”

For the rescue groups out there, Deborah encourages them to consider building a kitten kit program to support their local shelter and make a significant lifesaving impact.

“Rescues can take cats out of the shelters every year, but there will always be more than we can help,” she says. “It’s like the parable of the starfish, where thousands of them wash ashore and die. A few are saved by a boy throwing them back into the ocean, who says that though his efforts may not save them all, they will make a difference to that one or two.

“Instead, why don’t we focus on changing the course of the water, so they aren’t washing up in the first place?” she continues. “Metaphorically speaking, putting together these kitten kits is my modest way to try and do that.”