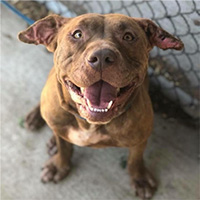 Thanks to Best Friends Animal Society and the Rachael Ray Foundation, Heartland Animal Shelter was able to transfer 91 dogs from Chicago Animal Care and Control (CACC) between July 2018 and June 2019. These dogs were exhibiting behavioral issues, kennel stress or were deemed to be at risk of developing these behavioral challenges for various reasons, including advanced age, poor health, large size and length of stay. In total, 147 dogs were transferred from CACC.

These dogs that were part of the grant were put into our behavior and enrichment program to keep them physically, mentally and emotionally stimulated and supported, while also increasing their visibility for adoption. Seventy-nine of them have since been adopted and we know that all of the others will find their forever homes very soon.

We were overwhelmed by the response from our community and supporters, who were so pleased to see us expand our enrichment and behavior program to help more Chicago dogs at risk of euthanasia. As we look to the future, we will be developing our own community education program in 2019 to get more large and harder-to-place breeds into homes. This grant helped us realize the importance of expanding our advocacy for at-risk dogs.

Our projected outcome was 36 dogs and we more than doubled that goal! Two of the 79 dogs whose lives were saved were Iris and Soni.

Iris was at CACC for three months because of her breed, size and permanent damage to her ears from a combination of diet, stress and recurring self-inflicted trauma. Iris began to heal beautifully with individualized attention, care and enrichment and she was adopted out in no time.

Soni was at CACC for six weeks because of her breed, size and behavioral issues. Soni had high kennel stress and was one of the dogs worked with most intensively by our enrichment volunteers and professional trainer. She soon mastered good decision-making behaviors and found her forever home. Thank you, from all of us at Heartland Animal Shelter, for the 2018 Rachael Ray Save Them All Grant! We truly could not have saved them all without you. 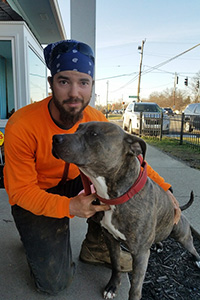 The Kentucky Humane Society (KHS) is grateful to Best Friends Animal Society for partnering with us from March 2018 to February 2019 to reduce shelter intakes and deaths by providing spay/neuter surgeries to large dogs. With $30,000 from The Rachael Ray Save Them All Grant, we provided 600 free spay/neuter surgeries to large dogs whose owners live in Louisville’s poorest and highest-intake zip codes.

The purpose of this project was to reduce shelter deaths of large dogs in Louisville by offering free spay/neuter surgeries to large dogs from homes, with the goal of reducing the number of large dogs surrendered to our city’s shelters and achieving a community live release rate above 90% by the end of 2018. We are thrilled to report that this goal was achieved! Collectively, Louisville’s two largest shelters (KHS and Louisville Metro Animal Services) had a save rate above 95%! (The save rate was 94.7% at LMAS and 96.1% at KHS.) Our community has made tremendous lifesaving strides over the last several years, due to targeted spay/neuter, managed admissions, pet retention programs, increased adoptions and in-shelter medical and behavioral services.

Thanks to support from Best Friends, KHS had the funding to provide surgeries for large dogs in select zip codes — animals least likely to be spayed or neutered (often due to the cost of private veterinarians performing this service). This assurance gave us confidence and financial security to move the S.N.I.P. Clinic to a much larger building in fall 2018. The new building is twice as large as the old building and has three times the number of parking spaces, and it is helping us to better serve our community and enabled us to hire a second full-time veterinarian. This second hire is allowing us to focus more on the need, which is large dog spay/neuter surgeries.

Thanks to Best Friends investment over the last number of years, Louisville has become a model city in terms of the treatment and care for companion animals. Citizens have embraced spay/neuter, and we are seeing local shelter intakes being drastically reduced (by more than 60% since 2012). This is allowing our city shelters to better serve the animals and people in our community and has given KHS the opportunity to help more rural communities in Kentucky, where overpopulation and euthanasia are unfortunately still very common. By funding spay/neuter surgeries in Louisville, Best Friends is helping KHS not only reduce shelter intakes and improve outcomes Louisville area, but also to reach out to shelter animals throughout Kentucky.

The Snake River Animal Shelter (SRAS) in Idaho Falls, Idaho, would like to take a moment to thank Best Friends for the great movement that has been made in the realm of saving the lives of cats. We received a $10,000 grant from the Rachael Ray Foundation through Best Friends to help lower cat adoption fees, and it has been wildly successful!

It has been fun to design events to draw people to SRAS to look at our feline friends. We named our fund to lower cat adoption fees the "Catapalooza Fund," and since receiving the grant we have attracted more than $7,000 to help continue lowering cat adoption fees. We have been super-excited to see both the community and the donor response for this project.

Among the lives saved through this project were nine young, pregnant momma cats that were slated for euthanasia at the local municipal shelter. Angelica, one of these mommas, is one of the sweetest, most adorable kitties you will ever meet. Angelica had five little rug rats in a foster home, and all of them are named after the popular characters in “Rugrats,” the TV cartoon series. As soon as the babies were old enough, they were altered and brought back to the shelter with their mom for adoption. Because of the Rachael Ray Save Them All Grant, Angelica and all of her kittens found homes at a record rate. Thank you, Best Friends, you have been an incredible partner in saving lives!