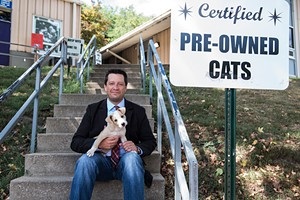 Brent Toellner joined Best Friends in November of 2016. As the senior director of national programs, he oversees Best Friends’ regional work and helps the organization prioritize national initiatives in working with local partners to facilitate lifesaving programs that have maximum impact toward achieving no-kill nationwide by 2025.

In 2011, Brent, his wife Michelle and a few others co-founded the Kansas City Pet Project (KCPP) to bid on the contract to run the Kansas City pound, a place where, for decades, more animals died than were saved. They won the contract and since KCPP took over in 2012, the shelter has had a live release rate of more than 90 percent while remaining an open-admission shelter, making it one of the largest open-admission no-kill shelters in the nation.

Brent still serves on KCPP’s board of directors and writes the “KC Dog Blog” (kcdogblog.com), in which he shares information about the fight against breed-specific legislation and no-kill practices. Before forming KCPP, Brent volunteered in animal rescue and then advocacy as the legislative chair for KC Dog Advocates.

Brent lives in Kansas City, Missouri, with his wife, and they share their home with both dogs and cats.