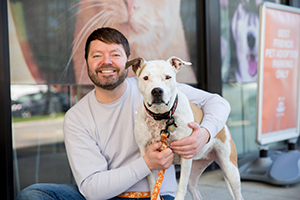 Arlyn Bradshaw is the director of the mountain west region, after previously serving as the executive director for Best Friends in Utah. In this capacity, he coordinates life saving collaboration across the eight states of the mountain west. Based in Salt Lake City, Arlyn has direct oversight of Best Friends programs that are turning Utah into a no-kill state. Together with the NKUT initiative and its coalition of nearly 60 animal welfare organizations, Best Friends Utah runs its own Pet Adoption Center, kitten nursery, and two spay/neuter clinics.

Arlyn is an alumnus of the University of Utah, holding a BA in Political Science and a Masters of Public Administration. Prior to Best Friends, he worked at the University of Utah as the assistant dean of students. Originally from rural Idaho, Arlyn has been active in Utah politics and the University of Utah community for over a decade.  He currently lives in Salt Lake City with his partner, Neil Webster. They have three rescue pit bull terriers, Bella, Atticus and Sweet Pea, and a dachshund named Fritz.