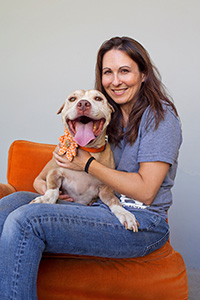 Angela Rovetto is the Mid-Atlantic senior strategist for Best Friends Animal Society and works closely with strategic shelters and communities in six states to help increase their lifesaving capabilities. From identifying strategic and programmatic needs to problem-solving and connecting to resources, Angela provides customized guidance to agencies and organizations as they work through the stages of increasing lifesaving and resources in their communities.

Angela began her career in animal welfare working at Best Friends Animal Sanctuary with behaviorally challenging dogs and has training and experience in emergency response. In 2012, she was a founding team member to establish Best Friends’ first program city in Los Angeles in a private-public partnership with the goal to help Los Angeles Animal Services increase their save rate from then 54 percent (annual intake approximately 30,000) to 90 percent.

Working in L.A. for six years in shelter environments from low-income areas to downtown Santa Monica, Angela gained diverse hands-on experience in shelter operations and programming, created and led various operational teams and saw  firsthand how human issues, challenges and lack of resources contribute to animals ending up in shelters. It was a transformative experience where she had the opportunity to see many of the beliefs and fears she’d been raised with upended and how implementing progressive lifesaving programs and community embracing philosophies makes all the difference for pets in a community.

With Los Angeles on the way to its goals, Angela joined the Mid-Atlantic regional team in 2017 for the opportunity to work directly with shelters and communities, wanting to help others overcome the challenges and make the transition to current, proven effective operations and programs in order to save more lives and become their community’s respected animal resource center.